Life is all about the journey they say and after graduating from the University of Queensland in 1989, Dr Ervan Seeto has finally set-up his slick, new, modern practice in a landmark heritage development of an old brewery in trendy East Melbourne.

Along the way however, he managed more than a little adventure with what used to be the almost obligatory pilgrimage to the United Kingdom.

“I graduated from University of Queensland and then commenced my professional career in Lismore and Nimbin, New South Wales,” Dr Seeto explained, “In 1993 though, I left for the United Kingdom on what was to be a two-year working holiday. I ended up spending 13 years there!

“My experience in England included 2- years in NHS practice in Oxford along with 8-years in private practice in Covent Garden, London. I was fortunate to be part of a very dynamic and vibrant practice in the heart of London’s West End. Working there as an assistant dentist gave me valuable insight into the business side of dentistry and I wanted to emulate that back in Australia.

“So in February 2006, I returned to Australia and my English partner and I decided to start a new life in Melbourne, a city neither of us had ever lived in. So it’s been an exciting and challenging time for us both! “Our quest for living quarters brought us to the old Victoria Brewery in East Melbourne.

The Brewery was recently redeveloped into Tribeca with over 450 apartments and a retail precinct at ground level. It combines heritage-listed buildings with modern design very well. We ended up renting an apartment there and it was also there that an empty shop caught my eye in the original Brewery Tower.
From that period on, I began to dream about starting up my own practice.”

Dr Seeto felt the site at Tribeca was right to set up a new, modern dental practice. The demographics of the area suited the type and style of dentistry he wanted to practise. “To realise my dream required months of planning. It was very daunting at first as I didn’t know where to start. I sought advice from colleagues and individuals in the dental industry to gain a realistic insight as to what was involved in setting up a new practice. The viability study I carried out proved invaluable.

“One of the vital components was the design and fit out of the practice. I arranged a meeting with Sam Koranis of Medifit. Even though they were based in Perth, I was impressed by the number and quality of the projects they’d already undertaken nationally and the feedback from their clients that I spoke to was positive.

“At my first site meeting with Sam and his project manager, Michael Bleechmore, I was reassured to hear that the space would be suitable for a dental practice. They were honest in their appraisal regarding the challenges to provide services such as plumbing and air conditioning. From beginning to end, they were able to guide me as well as handle, on my behalf, the many processes that I would encounter along the way such as council applications and Body Corporate requirements.

“It was a pleasure working with their design team who were able to realise my vision of the practice on paper and in 3D computer-generated graphics. They were able to integrate my appreciation of design, style and aesthetics and balance this with simplicity and functionality.”

The ground floor tenancy selected by Dr Seeto retains the character and exposed steel work from the building’s original use and has great exposure to the nightlife and buzz that the Tribeca Apartments has created. Visually, Dr Seeto worked with a London-based graphic designer friend to create the logo and artwork and this was introduced as a striking and dramatic effect in the shopfront glazing.

“The overall feel that Dr Seeto wanted to create was a dramatic and strikingly modern space that was still very approachable,” Mr Koranis said. “So we wanted something that visually linked all the windows together to define the extent of the dental practice. The large format vinyl stripes that crisscross the windows inject life into the visual scape.”

Features in the entry and reception area include the custom golfball dimpled reception counter made from Corian and custom-fabricated to create a textural surface that begs to be touched. The colour palette consists of varying shades of gunmetal and grey with a striking orange highlight, all tempered down with the warm tones of the Polyflor timber vinyl flooring. Use of rich dark coloured walls blurs the definition of vertical surfaces, opening up the rooms rather than closing them down. The practice incorporates three treatment rooms (two of which face the outside world).

From a marketing perspective, the 12-metre frontage inclusive of the reception/waiting area and two surgeries sends a strong message of what services are provided 24/7. At night, the blinds go up in the surgeries to show the floating illuminated dental cabinets and the halo over the bulkhead acts as a strong visual impact which captures the eye immediately detailing what lies within; a large centrally accessed sterilisation room with attached lab facility, patient toilet facilities, refresh area and staff room as well as a private office/retreat for Dr Seeto.

Spatially, these rooms are all accessed from a central corridor. Due to noise requirements and limitations placed on the tenancy, the plant room was housed within the staff room in an acoustic enclosure. In the treatment rooms, Dr Seeto was specific in how he visualized the overall look. The cabinets were to appear floating over the floor on a bed of light and clean with slick lines throughout with layers of detail.

Corian benchtops and seamless Corian bowls add to the neat finished-off appearance. The walls were thickened up to allow the cabinets to be recessed into them creating different levels of vertical and horizontal surfaces. The recess in the wall was clad in gunmetal black painted glass to amplify the feeling of space within the room without just staring at your reflection. The dropped ceiling over the chair conceals recessed ambient lighting and appears as if the wall has been peeled back and lifted up in place.

“Ervan wanted to create a practice that fitted in with the surroundings yet stood out on its own with the trendy and hip locale. A dental practice with a buzz and energy of its own,” Mr Koranis said. “I believe we were able to achieve this successful on time and budget.”

“It’s been a very personal and rewarding journey,” Dr Seeto said. “I have enjoyed every moment of it. I entrusted my dream to Medifit and they have delivered a dental practice of which I am very proud. They exceeded my expectations. I would utilise the services of Medifit if I were to do this again.
“The tradesmen were always professional, efficient and approachable. A project such as this will inevitably present problems along the way and Medifit were able to deal with these effectively as well as delivering on time.
“The practice has generated much interest within Tribeca and East Melbourne. It is modern and respects the strong heritage elements of the building. The patients love the practice and we have received many compliments. And best of all, it’s so close to home.” 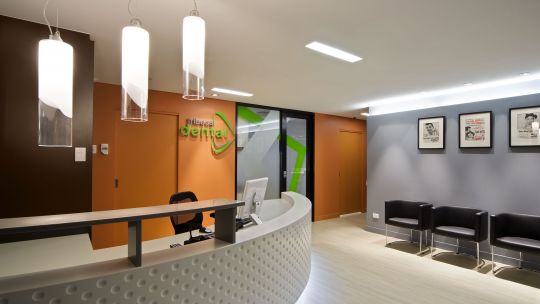 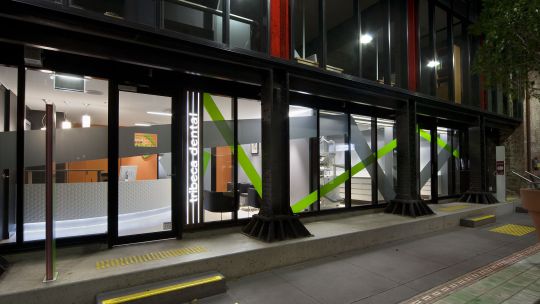 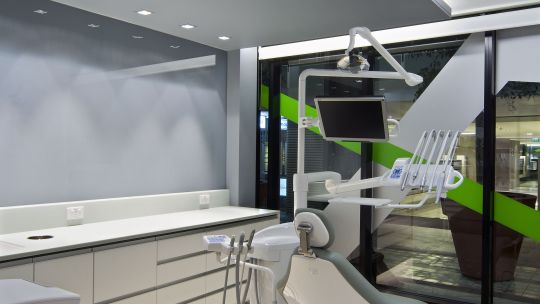 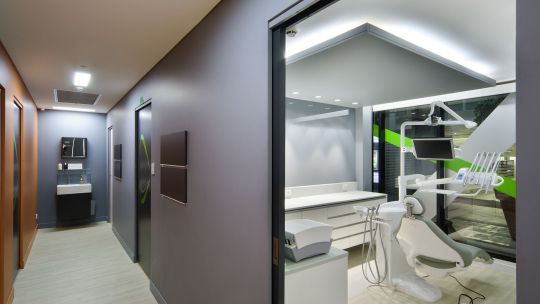 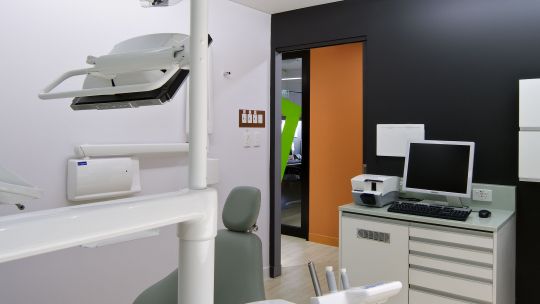 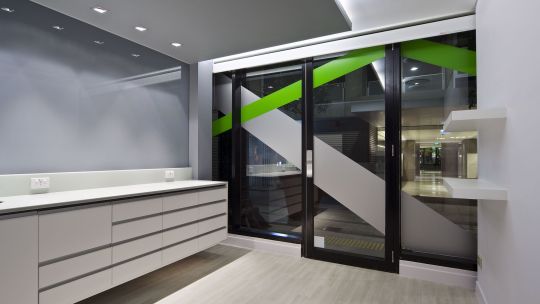 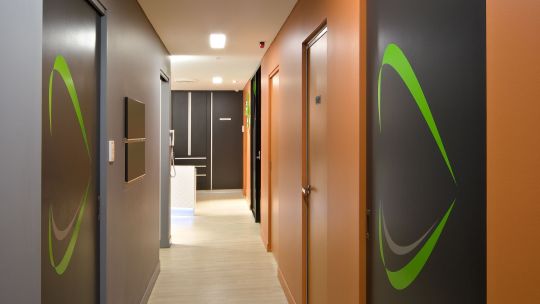 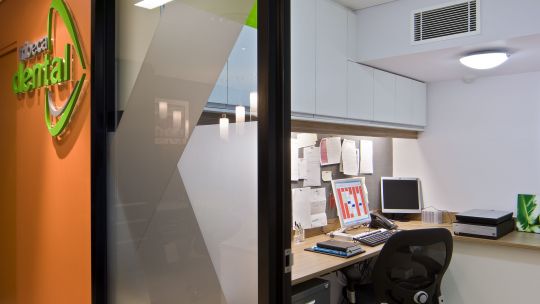 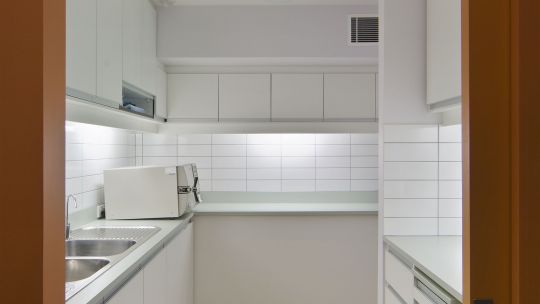 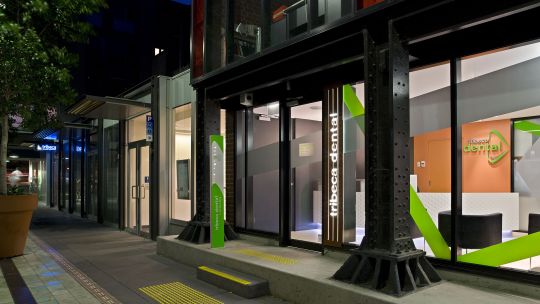