Gladstone in rural Queensland must be a very special place. Not only does it have a new dental practice to serve the community, but it’s also staffed by one of its own.

Dr David Fortier bucked the trend of leaving the bush to study and become seduced by city life, never to return. “I graduated as a Physiotherapist from Central Queensland University in 1996 but after working for a short period of time, I realised that this profession was not for me,” Dr Fortier said. “In 1997, I applied for admission to Sydney University to acquire a Bachelor of Dentistry.

After 5 years, I graduated and relocated back to my hometown of Gladstone, Queensland to accept a position with an established practice. “In 2006, I decided I was ready for something more. In July, an opportunity to purchase an existing practice in town arose. After consideration, I declined that offer to pursue the desire for my own purpose- built practice.

“Not knowing where to start, I contacted Medfin Australia to acquire finance and they also provided details of a few specialist businesses that fit-out dental surgeries. The first and only call I made was to Medifit Design & Construction. From my very first conversation, I felt comfortable in the knowledge that this would be a great working relationship. It was also reassuring that this Perth-based company had completed so many fitouts in Queensland and in particular, in rural and remote locations.

“After some initial discussions, Medifit Managing Director, Sam Koranis, flew to Gladstone to meet my wife and I to showcase their projects. During his stay, he met with our accountant and discussed cash flow projections and surveyed the sites we were interested in. Sam’s knowledge of the business of dentistry was exemplary and impressed both ourselves and our Accountant. His guidance proved to be invaluable in securing the appropriate site and the forecasted cost he predicted at this early stage of discussions to build the project were very accurate.

From the very beginning, the pitch was very professional and personal and the quality of their past projects were amazing. After this meeting, it was an easy decision to award Medifit our project. “Being young and naïve to the processes involved in starting a business, Medifit provided complete support and assurances, everything from lease negotiations on our behalf with the landlord, to council negotiations, to designing and fitting out our new practice.

Their technical knowledge was excellent inclusive of all Queensland regulations. The time taken from engaging Medifit to operating out of the practice was minimal. Considering the size of the project annd the building works involved to get the tenancy ready to fit-out, we found it amazing that the construction and fit-out period only took 6 weeks!”

The brief for the practice was to create a modern, striking and inviting destination, where the large open planned reception and waiting areas are paramount in activating the streetscape. As the practice is positioned in the entertainment precinct of Gladstone, a “café” style was invoked to integrate with the urban environment. The front facade was converted to semi-frameless glazing to create a seamless connection between the pedestrian walkway and the dental practice interior. The existing roofing truss beams were clad in a matt aluminium sheet to appear as a single solid mass through the reception interior beyond the front facade and into the underside of the exterior awning. This also echoed the mall shelters outside the practice.

The reception was specified in quality timber veneers in unison with matt aluminium trimming and natural stone detailing. The signage needed to be artistic, discreet and most importantly representative of a vibrant and active destination. Colours are coastal/tropical-themed, with Mamba Green highlights, rich wood grains and crisp Opal White on walls to suggest glistening beaches. Virtually nothing of the existing structure was left in its original state and the completed practice had to appear totally new. The clients required that the surgery needed to be considered state-of-the- art in comparison to surgeries in any major city Australia-wide.

The rear rooms of the practice were arranged along a curved corridor in such a way that anyone standing in the street would not have a clear line of sight into any of the surgeries. The lab, sterilisation room, toilet and staff room are placed well back so as to have little interaction with the streetscape allowing the seating within the waiting area to have the biggest impact. Seating is deliberately casual, to follow the café theme. Almost all finishes are Australian, from the timber ceiling panels to the chair fabrics. The actual building is quite old, and has a sloped roof which reaches its lowest point in the centre of the tenancy. Probems getting services such as air conditioning to work effectively were solved by using drop bulkheads and including niches into the corridors.

Getting light into the centre of the building was also difficult. All surgery doors have large clear panels, with positioning determined by consideration of sight lines and radiation shielding. The curved walls needed to be carefully set out so the cavity sliding doors worked properly and the curve was uninterrupted. Curved interior walls always make any built-in cabinetry more complex, and space planning more challenging.

“With the design and construction team at Medifit. we have achieved something unique and amazing,” Dr Fortier said. “The practice speaks for itself. Our staff and clients love it and we are continually receiving accolades from one and all. “When our next project arises, we are confident that Medifit will provide us with the same fantastic support to again create something magnificent! This company stands out head and shoulders above the rest. We highly recommend Medifit for any project, anywhere in Australia.” 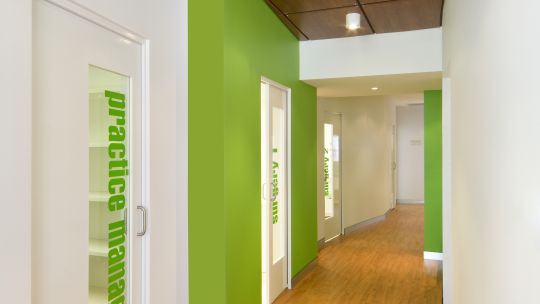 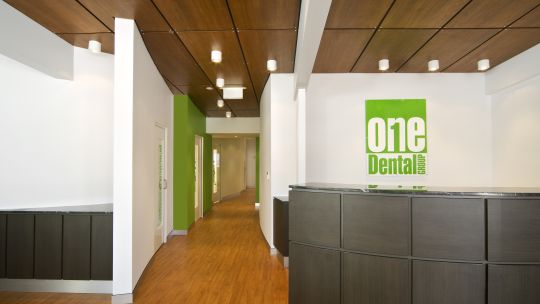 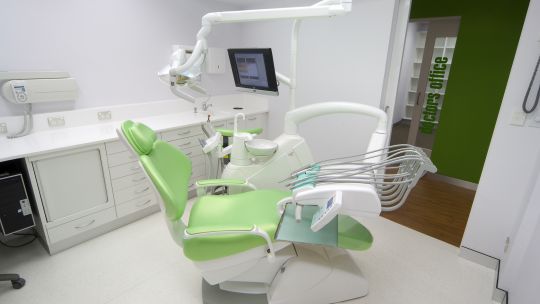 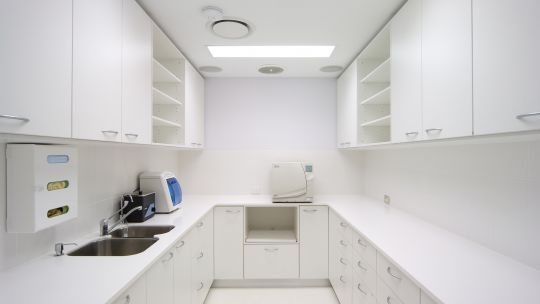